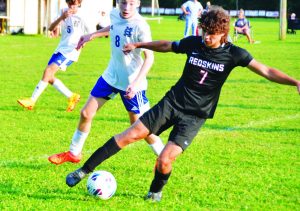 The Caldwell High soccer team hosted Harrison Central on Thursday, with the Huskies winning a close one against the Redskins, 2-1.

“This was a hard loss,” said Caldwell Head Coach Kellie Fry. “We were in the game and should have won the game. We cannot have that many shots not find the back of the net.

“It was good to see that it could have been our game,” she said, “because everybody played hard. That was a definite positive takeaway. Nobody gave up. We played with intensity the entire game. I was proud of the heart we showed on the field, but it was a tough loss.”

Neither team could find the goal in the first half as the defenses and goalies dominated play.

The Huskies got on the board first with a goal by Jace Madzia with about 25 minutes left in the game.

Harrison Central added another goal when Lunis Hildebrandt  found the net about five minutes later for a 2-0 advantage.

The Redskins closed the gap to 2-1 a few minutes later when Zac Frame scored on an assist by JR Curry. 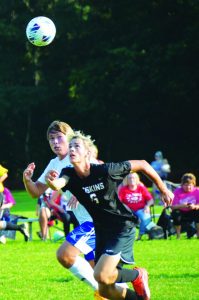 The Redskins traveled to West Virginia to face Wood County Christian on Saturday, returning home with a 3-1 victory.

The Wildcats started the scoring when Sam Chichester put one in the back of the net.

Caldwell’s JR Curry tied the score at 1-1 with a goal off a Carter Wheeldin assist right before the half.

Phillip Kowalsky scored to put Caldwell in the lead, 2-1, early in the second half and Zac Frame finished the scoring late in the game to secure the win for the Redskins. 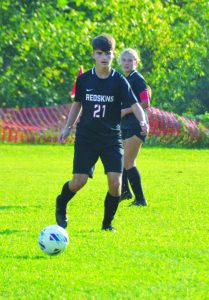 The Redskins (2-1) host Shenandoah in the first annual Knights of Noble County United Heritage soccer match on Monday at 5:30 pm. They will also host Wheeling Central on Tuesday.