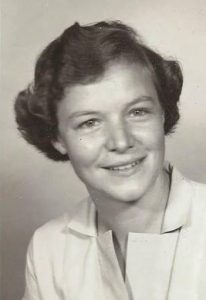 Roberta G. Cain, 92, of Quaker City, Ohio, died Saturday, August 27, 2022, at Crestview Rehabilitation & Skilled Nursing Facility in Lancaster, Ohio. She was born May 22, 1930, in Florence Addition in Noble County, the youngest child of the late Arthur S. and Edna Brown Koons. Roberta was a 1948 graduate of Caldwell High School. She was an LPN graduate of Hocking College School of Nursing. And most importantly, she was a faithful member of Quaker City Baptist Church.

She is survived by two sons, George (Martha) Cain of Kill Devil Hills, North Carolina, and Dale O. Cain of Malta; one daughter, Sally (Kenneth) Mathews of Lancaster, Ohio; four grandchildren; six great-grandchildren; and a multitude of nieces and nephews.

Calling hours will be observed Friday, September 2, 2022, from 6-8 p.m. at McVay-Perkins Funeral Home, 416 East St., Caldwell. A graveside service will be observed Saturday, September 3, 2022, at 2 p.m. at Dudley Cemetery with Pastor Larry Jellison officiating. In lieu of flowers, contributions may be made in Roberta’s name to the Quaker City Baptist Church. An online guestbook may be signed at www.mcvay-perkins.com