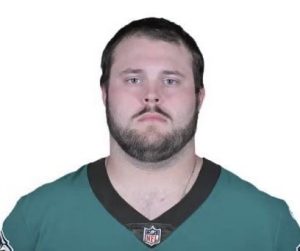 He’s been labeled perhaps the biggest surprise to land a spot on the Philadelphia Eagles 53-man roster today.

Josh Sills deserves everything he has achieved through hard work and determination.

The latest on that list came Tuesday when it was announced Sills, who received countless honors in both high school and college for his play on the offensive line, had survived as one of 10 offensive linemen – and one of just three undrafted rookie free agents – to make the Eagles’ roster.

Signed as an undrafted free agent on May 1, his size, ability to play multiple positions on the line and his play in camp and during three preseason games led to effusive praise from Howie Roseman, Executive Vice President of the Eagles, at a press conference following the announcement of the 53-man roster.

“I’m not putting him in Canton,” he continued. “I’m starting to listen to my own description, and it sounds unbelievable, but the guy has talent in his body.” 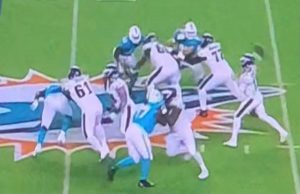 The Eagles have been touted as having one of the top starting offensive lines in the NFL, but finding backups is equally important.

“We had a lot of tough decisions on the offensive line,” said Roseman. “We’re very fortunate to have the offensive line group we have. Obviously, we talk a lot about Stout (run game coordinator/offensive line coach Jeff Stoutland] and how he coaches those guys, and that was probably the toughest position group for us to kind of cut down.”

In case you forgot, here’s a look back at Sills’ road to the NFL: 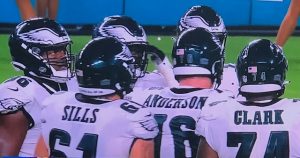 A 2016 graduate of Meadowbrook High school, he was a four-year letterman who was an imposing, dominating offensive tackle who showed his versatility by leading the team with more than 60 tackles as a senior while also handling the kicking duties, averaging nearly 42 yards per punt and connecting on 27 point-after kicks as a senior and 69 during his career.

The Colts finished 9-2 during his senior season, the best record in school history to that point, and were the runner-up in the OVAC Class 4A division. MHS made its first-ever appearance in the OHSAA playoffs, losing 35-22 to unbeaten Johnstown-Monroe.

Sills was selected to play in the Offense-Defense All-American Bowl in Orlando, Florida and for the South Division IV-VII team in the OHSFCA North-South All-Star Classic at Dayton’s Welcome Stadium.

Colleges took notice and Sills earned a football scholarship to West Virginia University, only the second D-I football recruit in school history (the other was Rob Ferhman who attended Bowling Green State University).

As a redshirt sophomore in 2018, he started 12 games at guard, and earned several postseason honors, including second team all-Big 12 coaches selection and also received second team accolades from Pro Football Focus/College. That year, the Mountaineers played Syracuse in the Camping World Bowl.

His redshirt junior season was cut short after just two games by injury, and he entered the transfer portal and landed at Oklahoma State University.

He made an immediate impact in Stillwater, earning first team all-Big 12 recognition by the   Associated Press and gaining honorable mention on the coaches’ selections.

In 2021, he was a preseason first team all-Big 12 selection by multiple outlets, and finished as a first team all-Big 12 guard at season’s end. The Cowboys went 12-2, finishing as Big 12 runner-up after losing to Baylor in the championship game, and then beat Notre Dame in the Fiesta Bowl. He got a chance to impress scouts one more time when he played in the NFLPA Collegiate All-Star Game.

There’s still a lot of work to do for Sills to remain an Eagle, but for now, the former Zep and Colt is an NFL player!