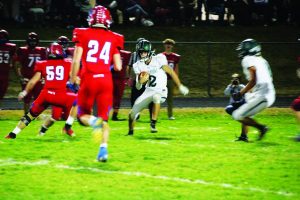 Things went from bad to worse for the visiting Shenandoah Zeps as Fort Frye raced to a 63-0 lead before settling for a convincing 71-20 victory in the OHSAA Division VI, Region 23 semifinals Friday night in Beverly.

The game between the No. 1-seeded Cadets and the No. 8-seeded Zeps proved to be a mismatch from the outset, with Fort Frye flexing its muscle by scoring on each all 10 of its possessions in the contest.

“In my opinion Fort Frye is one of the top two teams in the state in Division 6,” offered Shenandoah coach Josh Lowery. “They have so many athletes and were very physical…we were just out matched.

“We couldn’t stop the jet sweep and couldn’t get anything going offensively,” he added. “We made mistakes and they capitalized on them.”

Fort Frye (11-1) forced a three-and-out by the Zeps to start the contest thanks to a big sack by Stone Dixon and the hosts went right to work.

Brown was untouched on the two-point conversion run and the Cadets had an early 8-0 advantage with 7:22 on the first quarter clock.

Another Zeps’ punt ensued and The Fort needed just two plays to cover 55 yards, with Owen Brown running for 29 yards to set the stage for a Miller-to-Huck 36-yard TD strike.

After gaining two first downs on a 10-yard pass from freshman QB Braxton Barnett to junior wide-out Brenden Portman and a 12-yard rush by junior Jacob Feldner, the Zeps turned the ball over on downs and it didn’t take long for the Cadets to strike again.

It was Owen Brown finding the end zone once again, racing around the left side for a 32-yard score. Huck’s extra-point boot gave Fort Frye a 22-0 lead with 1:51 left in the first period.

A 27-point second quarter by the Cadets put the game out of reach.

The first tally came on a 17-yard pass from Miller to Huck at the 9:15 mark, with Brown running for the bonus markers and a 30-0 lead. 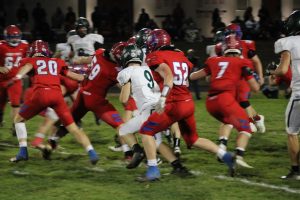 After a Huck interception and return to the Shenandoah 12-yard line, Fort Frye’s next tally was a two-yard walk into the end zone by Austin Powell. Another Huck PAT made it 37-0 with 7:37 left in round two.

Another “pick” – this time by Keegan Strode – followed and soon thereafter, Brown ripped off a 50-yard TD run and although the PAT kick “doinked” off the left upright, it was now 43-0 with 4:27 left in the half.

Fort Frye got the ball back with less than three minutes to play in the first half and that was more than enough as a pass interference penalty and a 32-yard run by Powell set up a three-yard TD run by Powell. Huck’s PAT upped the ante to 49-0 with 2:02 until intermission.

The Cadets got two more tallies in the first three minutes of the third chapter – first on an 70-yard kickoff return by Braxton Brown and then on a 65-yard sprint to the end zone by Own Brown at the 9:06 mark.

Two more Huck extra-point boots had the hosts in command, 63-0.

Shenandoah finally dented the scoreboard at the end of a 12-play series that featured a 32-yard pass from Barnett to Portman, with the same combination teaming up for a 19-yard touchdown. Savannah Irvin booted the PAT and it was 63-7 with 1:40 left in the third period. 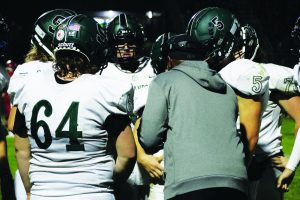 The Zeps pulled off an on-side kickoff and scored in six plays, with Portman running 15 yards to paydirt. The point-after was blocked to leave the score 63-13 with 11:47 remaining.

A 62-yard run by Tyce Beardsley led to another Fort Frye score – a one-yard run by lineman Joe Stevens followed by a two-point conversion run by Beardsley which had the Cadets on top, 71-13, with 6:40 left.

Four Cadet penalties helped the Zeps move down the field and set up a late four-yard TD run by Ayden McPeek, with Irvin’s PAT closing the scoring with 23 seconds to go.

Fort Frye’s total included 448 yards rushing and 61 passing. Brown carried just time times in racking up 234 yards with three TDs to lead the assault while Austin Powell had seven rushes for 78 yards; Ethan Duskey had five attempts for 40 yards and Tyce Beardsley had 61 yards on his one carry.

Miller completed 3-of-5 passes for 61 yards and two scores, with Huck on the receiving end of both six-pointers for a total of 53 yards. 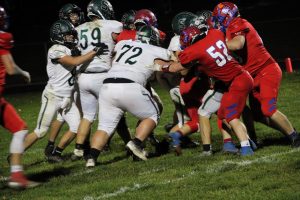 The Zeps closed with 223 total yards – 126 passing and 97 rushing. Barnett was 12-of-24 with two interceptions; Portman caught six balls for 98 yards and McPeek led the running game with 47 yards on nine carries.

Despite the loss, Coach Lowery was proud of how his team persevered through the season to finish at 7-5.

“I am so proud of this team – coaches included – and the way they handled all the adversity we faced this year. Words can’t express how much I love all of them. They could have quit on me when I became the interim head coach, but they didn’t. They continued to work their butts off and as result we won seven games and our first playoff victory in 19 years.”

He also praised the work of the outgoing senior class.

“This senior class was very special,” Lowery related. “Each one of them brought something different to our football team. I know their senior year didn’t end the way they wanted it to, but they laid the foundation and set the bar high for next year’s team.”

The SHS record book took quite a few hits this season. Unofficially, the chase for the all-time single-season receiving yardage record came down to the wire, with Brenden Portman edging Hunter Yates by the narrowest of margins. Portman had 57 catches for 906 yards while Yates had 53 catches for 894 yards, so Portman’s totals will stand as the records. Yates, meanwhile, set the new standard for TD receptions with 18. 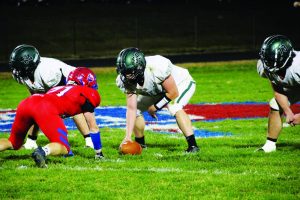 Friday’s game was the 527th consecutive SHS football game attended by statistician Gene “Mr. Zep” Davis – a streak that began in the fall of 1971! 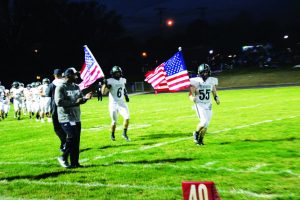