Never take your foot off the accelerator. 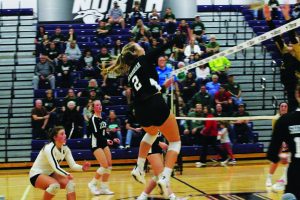 The Shenandoah Lady Zeps learned that the hard way as a two-set lead slipped away, with Tuscarawas Central Catholic rallying for a five-set victory – 19-25, 16-25, 25-20, 25-14 and 15-11 – in the OHSAA Division IV Regional Semifinals at Pickerington North High School on Thursday.

The loss ended an otherwise tremendous season for the Lady Zeps at 23-3. Along the way, Shenandoah picked up Division IV Sectional and District championships, won the Mid-Ohio Valley League crown and finished as the OVAC Class 3A runner-up, losing a five-setter to Union Local in the finals.

“This was the most athletic group of girls we’ve ever had in the volleyball program,” said Shenandoah coach Megan Grywalski after spending a long time in an emotion-filled locker room. “To have it end is really heartbreaking, but it was a really good season.” 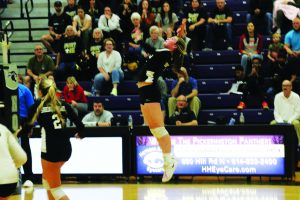 SHS freshman Brenna Leach goes up high for a return.

“Their leadership has been outstanding…they’ve worked so hard,” said Coach Grywalski, fighting back tears. “They all dressed varsity as freshmen in 2019 when we won the district and were part of three regional teams and that’s so impressive.

“They truly left their mark and I think the juniors fed off them and learned a lot that they will bring back next year,” she added.

The opening set went back-and-forth during the first half, with the Zeps leading by a slim 13-12 margin before scoring four straight to go up 16-12. TCC got within 16-14, but Shenandoah eventually prevailed 25-19 on consecutive kills by junior Mya Leach. 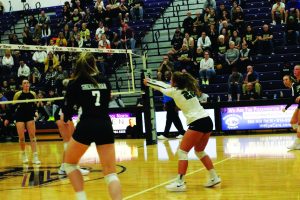 SHS senior Grace Wikander (22) bumps the ball over the net.

Set two was again close early and was tied at 7-all, but the Zeps reeled off 10 of the next 13 points to build a 17-10 advantage. The Lady Saints were unable to get closer than six from there, and it was Mya Leach again as the “closer” with four straight kills to seal a 25-16 win and give SHS a 2-0 advantage.

TCC regrouped and started set three with a 4-0 lead, and strong net play led by Maddie Ferrell pushed the lead to 16-5. The Saints were still in control at 19-9, but the Zeps charged back made things interesting with a 10-5 run before a Ferrell kill kept the Saints alive with a 25-20 win.

The fourth set was tied at 4-4 before TCC scored four straight and nine of the next 10 points to take control at 14-5. This time, Shenandoah was unable to surge and a 25-14 TCC win evened the match at 2-2. 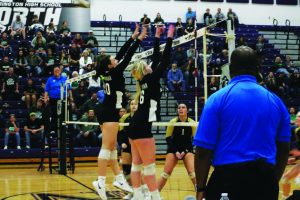 Shenandoah led 3-0 in the fifth and final set behind two kills from Wickham, but TCC worked its way back to a 5-5 deadlock and the match was still in doubt with ties at 9-9 and 11-11 before TCC finished its comeback with a kill by Reese Triplett; an ace by Kylee Dillon and two more Triplett kills. 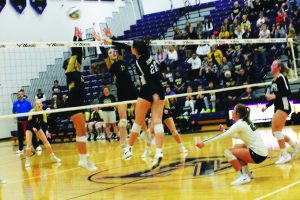 “They (TCC) made so many hitting and serving errors in the first two sets that we thought that would continue,” said Coach Grywalski, who concluded her sixth year as the SHS coach with an impressive 115-40 record, “We got overconfident and thought we had it in the bag even though I told the girls before the third set that they’d come out ready to play.

“We were waiting on them to mess up rather than just attacking them and finishing it off,” she said. “With our maturity, we should have been able to play to win it rather than having them lose it.”

Statistically, Mya Leach again led the Zeps with 19 kills, but she received solid support from Wickham with 10, freshman Brenna Leach with nine and junior Brylee May with six. Junior Heather Merry and Mya Leach divided up the majority of the assists, with Merry credited with 22 and Leach with 18. 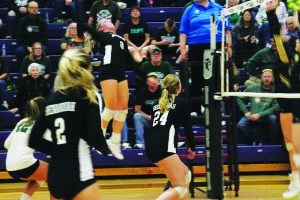 The Zeps were busy defensively, with Clift recording 23 digs while Wikander had 21 and junior Kadence Noll had 20. Mya Leach chipped in 15 digs and Merry had a dozen. Wickham notched four blocks and May had three.

Ferrell and Triplett led the net assault for TCC with 23 and 21 kills, respectively, while Khloe Trivoli had eight. Jordyn Caldwell and Ferrell divided the set-up role with 25 and 21 assists. 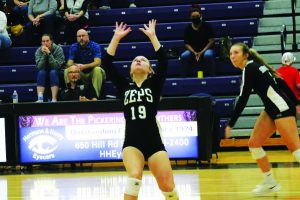 On defense, Rylee Dillon collected 17 digs, Julia Scairetti had 16 and Ferrell had 12. 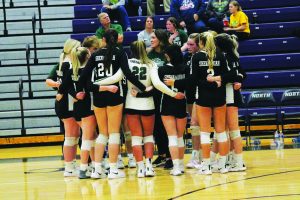