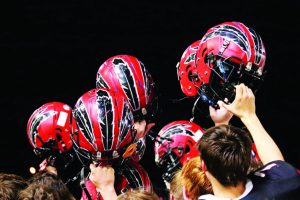 Redskins celebrate following their 56 to 12 win over the Sciotoville East Tartans.

The third-seeded Caldwell Redskins hosted sixth-seeded Sciotoville East on Friday in OHSAA Division VII, Region 27 second round action, with the Redskins moving on to the regional semifinals with a 56-12 win over the Tartans.

“They came out of the gate strong,” said Caldwell Head Coach Chance Rucker. “We expected power football and we struggled a little defensively in the first half, but we held them to just 40 yards in the second half. I am super proud of that effort.

“We just have to keep going 100 percent,” the Redskins’ boss continued. “That is what I am demanding – 100 percent execution rate in all aspects of the game. Offensively, we had 28 plays and scored eight touchdowns. We have a super-explosive offense, so we just have to continue to be strong.”

Caldwell took just two plays to travel 55 yards on the opening drive of the game. Quarterback Cale Bender ran the ball in from the 44 and Paisley Sidwell nailed the point-after kick to give the Redskins a 7-0 lead with 11:16 left in the first quarter. 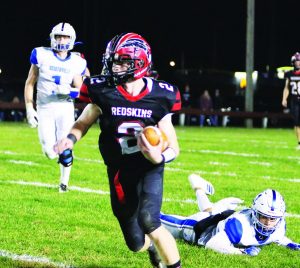 Crock after a catch

After the Redskins defense forced the Tartans to punt, the offense traveled 54 yards in five plays for the second touchdown of the game, with Bender running it in from the 12. The big play of the drive was a 28-yard pass from Bender to Ethan Crock. Sidwell split the uprights with the extra- point kick to give Caldwell a 14-0 lead with 7:25 to play in the first stanza.

The Redskins scored again after taking over on downs at their 13. Tyce DeVolld took the handoff and rambled 87 yards for the touchdown on next play, Sidwell again made the PAT  kick and Caldwell led 21-0 with 11:39 to play in the second quarter.

The Tartans then put together a nine-play 65-yard drive for their first touchdown.

Cam Justice ran the ball into the end zone from 18 yards out for the score. Landehn Pernell had runs of 11 and 10 yards to highlight the drive. The two-point conversion run failed, but Sciotoville East had cut the lead to 14-6 with 7:40 remaining in the half.

Caldwell responded with an eight-play 58-yard drive, with Bender finding Braxton Dudley with for a 23-yard touchdown pass. Bender also found Crock for an 18-yard pass and Marshal Sayre ran for 17 yards during the drive. Sidwell’s kick missed the mark and the Redskins led 27-6 with 5:13 to play in the second period.

Sciotoville East scored again on their next drive, traveling 77 yards in 10 plays. This time, Dylan Fitzgerald found the end zone with a 17-yard run. The two-point pass was no good and the lead was cut to 27-12 with 1:10 left in the first half. 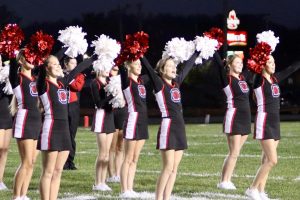 The Redskins scored again before the break, taking six plays to go 53 yards for the touchdown. Bender had his third rushing TD of the half, running it in from one yard out, and DeVolld ran in the two-point conversion as Caldwell took a 35-12 lead with 15 seconds left before halftime. 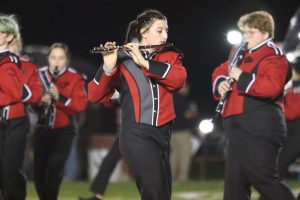 Caldwell scored on its first drive of the second half, taking four plays to go 44 yards for the score. Sayre got the touchdown on a 30-yard run and Sidwell kicked the ball through the uprights to give the Redskins a 42-12 lead with 8:15 left in the third quarter.

The Redskins defense again forced the Tartans to punt and then took three plays to travel 39 yards, with Bender getting his fourth rushing touchdown from 25 yards out. The PAT kick by Sidwell was good and Caldwell led 49-12 with 4:09 to play in the third quarter.

Caldwell scored its final touchdown on another one-play possession, this time with Sayre running it 50 yards for the touchdown. Sidwell nailed another point-after kick and the Redskins led 56-12 with 10:12 left in the game.

Freshman Brody Chandler had the only takeaway of the game when he picked an Austin Baughman pass late in the fourth quarter. 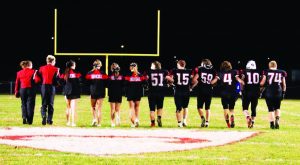 Senior band, cheer and football players’ last walk at the fairgrounds as teammates

“This was the seniors’ last game on this field,” said Coach Rucker. “It is something special. I told them before the game to not take this for granted because this will be the last time you will walk through the stands. It is something pretty sweet, especially with our culture and traditions.”

Caldwell had 472 total yards, with 370 running and 102 through the air. Sayre ran the ball seven times for 117 yards and two touchdowns while Bender carried the ball six times for 116 yards and four touchdowns. DeVolld ran three times for 95 yards and a TD.

Bender was 7-of-13 passing for 102 yards and a touchdown. Dyland Wheeler and Crock each had two eaches, Wheeler for 32 yards and Crock for 26.

Defensively, Sayre had 12 tackles and Colby Langley had eight.

Sidwell hit 6-of-7 PAT kicks and drew special praise from her coach.

“Paisley has to have the PAT record.” Coach Rucker commented. “She has close to 60 points on the season. if not more. I am super proud of her. She has put in the work in the off-season and deserves the recognition.”

The 11-1 Redskins will play River on Saturday 7 p.m. at St. Clairsville. The second-seeded Pilots advanced by beating Fairfield Christian 55-12.

“We will get back to it tomorrow with lifting and meetings and will be ready to practice Monday with a new game plan,” said Coach Rucker. “We had our sights on River for a minute. It will be a good game. We just have to keep grinding and move forward.”