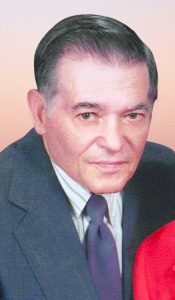 Hubert R. Young, age 87, of Caldwell, Ohio, formerly of Red House, West Virginia, died Thursday, November 10, 2022, at Altercare Summit Acres. He was born February 15, 1935, in Clendenin, West Virginia, son of the late Dana R. and Dessie L. Seebolt Young. Hubert retired in 1999 from the Ford Motor Company stamping plant in Walton Hills, Ohio. He was a member of the United Auto Workers and attended the Caldwell Church of the Nazarene. He enjoyed working and fishing.

In addition to his parents, he is preceded in death by his wife, Juanita June Yost Young, whom he married January 14, 1959, and who died November 19, 2008; and several brothers and sisters.

Friends may call Monday, November 14, 2022, from 1-2 p.m. at the Haven of Rest Memorial Gardens Chapel in Red House, West Virginia, where the funeral service will follow visitation at 2 p.m. with Pastor John Powell officiating. McVay-Perkins Funeral Home, 416 East Street, Caldwell, is caring for the family. An online guestbook may be signed at www.mcvay-perkins.com