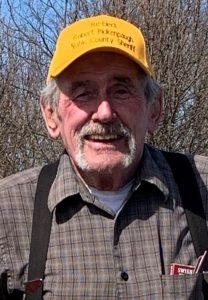 Landon T. Smith, age 80, of Caldwell, Ohio, died Tuesday, December 6, 2022, at his home. He was born November 2, 1942, in Caldwell, son of the late Charles L. and Martha L. Marquis Smith. Landon was a 1960 graduate of Caldwell High School and the Ohio Peace Officer Training Academy. He served as marshal for Belle Valley from 1962-1972, and also served as a bus driver for Noble Local Schools during that time. He was elected sheriff of Noble County in 1972 and served the county until 2009. He was devoted to serving the people of Noble County for 37 years. He didn’t know a stranger and knew everyone. He loved living and working on his family farm.

In addition to his parents, he is preceded in death by two brothers, David Smith and M. Neil Smith.

Friends may call Saturday, December 10, 2022, from 10 a.m.-1 p.m. at McVay-Perkins Funeral Home, 416 East Street, Caldwell, where the funeral service will follow visitation at 1 p.m. with Ken Perkins officiating. Burial will follow at Sharon Cemetery. An online guestbook may be signed at www.mcvay-perkins.com