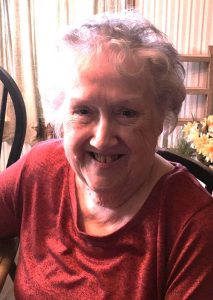 Thelma Ann Walters, age 77, of  Summerfield, Ohio, died Monday, December 5, 2022, at Marietta Memorial Hospital. She was born April 27, 1945, in New Bedford, Massachusetts, daughter of the late Manuel G. and Thelma L. Lackie Perry. Thelma was a 1963 graduate of New Bedford High School, where she was a library assistant. After high school, she worked at Stay-Lastic-Smith in the IBM department. She met her husband Jim in New England when she was a bridesmaid and he was a groomsman at her cousin’s wedding. They later moved back to his hometown of Caldwell. She was a 1993 graduate of Washington State Community College and its LPN program. She was employed by Summit Acres Nursing Home for 35 years, retiring as a licensed practical nurse. Thelma was baptized into the Church of Jesus Christ of Latter-day Saints in Massachusetts. She enjoyed watching evangelist Joyce Meyer on television. Along with her husband Jim, they served as 4-H advisors for many years and coached summer softball. She was an active Caldwell High School Band Parent. Thelma enjoyed reading, gardening, and baking. She was a beloved community member who loved caring for her friends and neighbors, and she was a devoted mother and grandmother.

Friends may call Thursday, December 8, 2022, from 10 a.m.-2 p.m. at McVay-Perkins Funeral Home, 416 East Street, Caldwell, where the funeral service will follow visitation at 2 p.m. with Ken Perkins officiating. Burial will follow at Sharon Cemetery. Memorial contributions may be made to the Sharon Cemetery Association, c/o Judy Baker, 15023 McConnelsville Road, Caldwell, Ohio, 43724, or to PAWS, Inc., Humane Society of Noble County at www.noblepawsinc.com. An online guestbook may be signed at www.mcvay-perkins.com