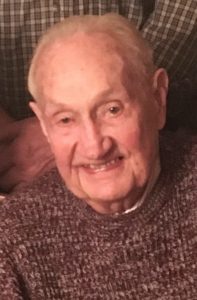 Arthur R. Hupp, age 92, of Caldwell, Ohio, died Tuesday, December 20, 2022, at Altercare Summit Acres. He was born January 25, 1930, in Noble County, son of the late John and O’Tillie Nau Hupp. Arthur was a graduate of Caldwell High School and he was a United States Army veteran, having served during the Korean War. He retired as a carpenter for Crock Construction in Caldwell following 47 years of service. He was a member of St. Stephen Catholic Church. Arthur enjoyed gardening and was an avid sports fan who loved the Cincinnati Bengals, the Cincinnati Reds, the Cleveland Cavaliers, and The Ohio State Buckeyes. He was devoted to his family, especially to his grandchildren and great-grandchildren.

A private service will be observed by the family and burial will take place at Mt. Olivet Cemetery, with a veteran’s service conducted by the Noble County Veteran Service Organizations. The family would like to offer special thanks to Arthur’s caregivers at Altercare Summit Acres and Absolute Hospice. McVay-Perkins Funeral Home, 416 East Street, Caldwell, is caring for the family. An online guestbook may be signed at www.mcvay-perkins.com