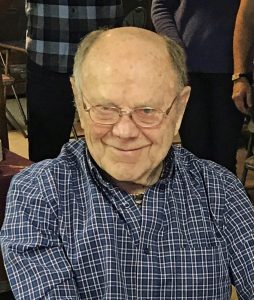 Howard Roman Schoeppner, age 93 of Caldwell, Ohio, passed away Sunday, December 25, 2022 at Southeastern Med in Cambridge, Ohio. He was born November 20, 1929 in Noble County, Ohio, a son of the late Albert and Marie Bishop Schoeppner.

He served and protected his nation in the US Army. He retired from Marietta Structures and worked for many years as the Village of Caldwell Street Superintendent. He was a member of St. Mary of the Immaculate Conception Catholic Church in Fulda, OH and a 3rd Degree Member of the Knights of Columbus Council 2565. He was a member of the Belle Valley American Legion Post 641. He enjoyed playing cards, especially Euchre. He liked to garden and could often be found working out in his perfectly manicured yard. Howard was a sports fan, especially the Cleveland teams and the Ohio State Buckeyes.

In addition to his parents, he is preceded in death by his wife Bernice L. Shafer Schoeppner, whom he married November 19, 1955 and passed away March 23, 2010; son Albert Francis Schoeppner; five brothers, Ralph, Norman, Melvin, Vernon, and Cletus Schoeppner; and two sisters, Arlene Eller and Leona Schell.

Friends will be received Wednesday, December 28, 2022 from 4:00 to 8:00 p.m. at the Chandler Funeral Home, 609 West Street, Caldwell, OH 43724, a time of sharing will begin at 7:30 p.m., with a Rosary Service held at 8:00 p.m. by the Knights of Columbus. A Mass of Christian Burial will be celebrated on Thursday, December 29, 2022 at 10:00 a.m. in St. Stephen Catholic Church in Caldwell, with Rev. Father Thomas Nelson serving as celebrant. Burial will follow in St. Mary’s Catholic Cemetery in Fulda, with military graveside honors conducted by the Noble County Veteran Service Organizations.

Memorial contributions may be made in Howard’s Honor to St. Mary of the Immaculate Conception Catholic Church – Building Fund, P.O. Box 286, Caldwell, OH 43724. Please join us in remembering Howard by visiting his memorial at www.ChandlerFuneralHome.net