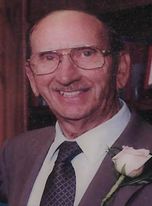 Charles Ford Wiley, age 98, of Caldwell, Ohio, died Friday, December 30, 2022, at his home. He was born July 31, 1924, in Sharon Twp., Noble County, son of the late Charles Bruce and Maggie Parks Wiley. Ford was a graduate of Forest Grove High School and was a United States Navy veteran. He served during World War II, from 1943-1946, and was an aviation mechanic serving in the Aleutian Islands. He was employed by Worl Thompson Motors as a service manager for many years, and he retired as a machinist from the former Gould Plant in Caldwell. Ford loved being a CB operator who used the handle “Red Lion”. He also loved fishing, gardening, and keeping his yard pristine. He was a friend to all.

In addition to his parents, he is preceded in death by his wife, Norma True Love Wiley, whom he married June 8, 1943, and who died October 24, 2011; an infant son, Charles David Wiley; one grandson, Justin Haas; one great-granddaughter, Emilee Van Fossen; two sisters, Etta Burrier and Ethel Iams; and five brothers, Walter, Wayne, Joe, Gene, and infant brother Ray Wiley.

Friends may call Wednesday, January 4, 2023, from 4-8 p.m. at McVay-Perkins Funeral Home, 416 East Street, Caldwell, where the funeral service will be observed Thursday, January 5 at 11 a.m. with Jimmy Moore officiating. A veteran’s graveside service will follow at Sharon Cemetery conducted by the Noble County Veteran Service Organizations. Memorial contributions may be made to the Sharon Cemetery Association, c/o Judy Baker, 15023 McConnelsville Road, Caldwell, Ohio, 43724. An online guestbook may be signed at www.mcvay-perkins.com