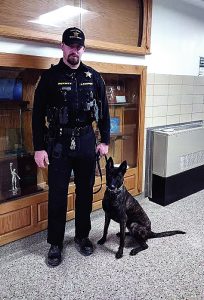 Safety of the students and staff is always of the utmost importance in the Noble Local School District, and a big part of that involves the presence of School Resource Officers (SROs) during the school day.

Noble Local is fortunate to have not one, but two SROs thanks to the Noble County Sheriff’s Department – Olivia Poling at Shenandoah Elementary/Middle School and Mitch Redden at Shenandoah High School.

The presence of the SROs  is vital, according to Noble Local Superintendent Todd Herman and Noble County Sheriff Jason Mackie.

“I think we are extremely fortunate to have an SRO at each building,” said Superintendent Herman. “Most violent situations come to a climax in three to five minutes and previously, with only one SRO in our district, we could potentially have a gap in our response time if the SRO were at the other building but now our SROs can get to anywhere in our buildings within 30 seconds.

“Additionally, the collaboration with Sheriff Mackie and the Noble County Sheriff’s Department is a focus,” he continued. “They attend our monthly safety meetings, and we are working on training opportunities with the deputies and Noble Local employees.”

“Our number one mission is to protect the children in this county as well as the elderly,” said Sheriff Mackie. “Protecting those who truly can’t protect themselves is paramount.

“Having someone at the schools who is trained and can respond and relay information to additional responders is critical,” he continued. “The positive impact the SROs can have with the children is also very important. 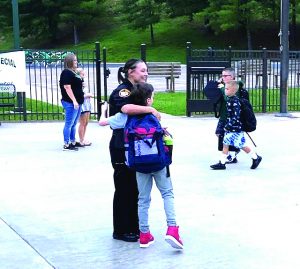 SRO Olivia Poling gets a hug from a student.

“Both Olivia and Mitch are Shenandoah graduates and they’re definitely ‘hometown heroes,’” the Sheriff added.

SRO Poling is the “veteran” of the two at Noble Local as she began her role in the middle of the 2020-21 school year.

“Originally, I wanted to be a Marine,” said Poling, a 2000 graduate of Shenandoah High School. “I got sick during my junior year in high school, however, and that changed my plans somewhat, but I knew I still wanted to do something along the lines of protecting and serving.”

Poling started in college taking Criminal Justice at Washington State Community College in Marietta which led to the Police Academy. After graduating there in 2010, she began as a Muskingum Watershed   Ranger; took a break to start a family and then returned to the workforce at the Sheriff’s Office in 2018.   She spent a year and a half as the SRO at Caldwell before coming to Shenandoah.

“I like dealing with kids,” she related. “They can’t always help the situation they have at home, so I have a soft spot for them.

“My husband works at the sheriff’s office (Will Poling, a K-9 handler), and he works the crazy hours, so I knew I needed a more constant schedule to also be a mom. (She has an 11-year old step-daughter and four-year old twin girls who will begin preschool next year.

“Our first duty is to protect the children and staff, to make sure the building is secure,” she said, “but just as important is building relationships with the students. We want them to know we’re normal people – we can play basketball with them or open their ketchup packet.

“We’re here to let them know they can trust law enforcement and if they come to us, we’re going to help them,” added Poling. “I know things that happen outside of school that affect the kids and there are times I understand why they may be having a rough day and just want to be there for them.”

What’s a “typical” day for Poling at SES/SMS?

“I start off with bus duty making sure the students are on the sidewalks and cars aren’t going where they shouldn’t be,” she stated. “Once in the building, I do security checks every hour on the doors to make sure they’re shut and locked, and at the end of the day I’m involved with dismissals to make sure kids get on the right busses and everyone is safe. In between, I’m interacting with kids at lunch, gym class and recess.”

The SROs are also involved in various safety drills throughout the year – fire, tornado, active shooter, etc. – to make everyone aware of what’s required in the event of an emergency.

Not surprisingly, the possibility of a real incident is in the back of Poling’s mind.

“My greatest fear is that it’ll be ‘go-time’ and there are a lot of people for one person to protect,” she said. “Thankfully Mitch can be here very quickly and being in constant contact with the Sheriff’s Office will get more help here quickly.”

On her “off” days from school, Poling works as a road deputy, answering the “regular” calls throughout the county.

“Eventually,I’d like to become a detective,” she said, “but I could also see myself being here long-term.”

SRO Redden, a 2014 SHS graduate, is the new face in uniform at the high school.

He graduated from the Police Academy in 2017 and began working at the Sheriff’s Office that fall. After five years, he spent one year as a deputy in Monroe County before taking the SRO job at his alma mater.

“I always knew I wanted to be in law enforcement, even as a little kid,” said Redden. “I grew up not far from here (SHS), and it’s a great opportunity to be back.”

“I see it as a bridge between the younger generation and law enforcement,” said Redden. “I’ve seen people both younger and older where there’s no reeling them back – they’ve chosen their path to live no matter what the result, but if I can sit down and talk to someone or be there for them, hopefully I can have an impact in some way.

“It’s certainly Important to find the bad guys or get drugs off the streets,” he added, “but it’s just as important to help the younger generation when they need it and to develop trust with them.”

Seeing an officer in full uniform can be intimidating to the students at first, according to Redden.

“It can be intimidating,” he said, “but that’s where gaining their trust comes in. You need to develop a rapport with the kids and know that you can’t always take things at face value. Some behavior might have other factors involved that aren’t readily apparent and I know what it’s like to be the kid who acts out.”

Redden’s day is much like Polings, except he’s dealing with older students and sometimes more serious issues.

“I’m there to make sure the kids get into the school in the morning and aren’t just hanging out around their car,” he said. “I’ll patrol the halls and interact with the students; do checks on building security with all the doors; and swing down to ‘Green Acres’ and check things out there as well.”

Redden – who communicates regularly with Poling at SES/SMS – says the motto “be prepared” is at the forefront in his position.

“I’m always running different scenarios in my head to be sure I’m prepared for anything that could come up,” he offered,”because I know I’m the first person here…the first line of defense.

“I want to be ready to do whatever I can to the best of my ability to protect the students here,” added Redden, who’s ultimate goal is to become a K-9 handler.

Another layer of support was the installation of metal detectors at the end of November.

“They will increase safety by ensuring that no weapons can enter our building by a student,” said Superintendent Herman “Once you know what is inside your perimeter, you can improve your focus on outside forces.”