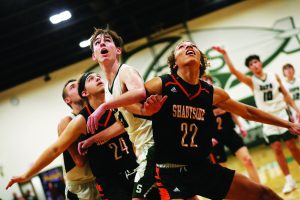 The Shenandoah Zeps started strong, but the Shadyside Tigers finished stronger to score a 67-61 score-from-behind victory on Friday.

After trailing by 13 points after one quarter, Shadyside outscored Shenandoah by 19 points the rest of the way to improve to 4-6 on the season. The loss dropped the Zeps to 5-5.

Shenandoah jumped out to a 5-0 lead at the outset and built on the advantage throughout the first eight minutes, assuming a 23-10 upperhand at the initial break.

Fairchild had the hot hand for the Zeps with 15 tallies in the quarter while Brock scored eight for the Tigers.

Junior Tyler Stottlemyer knocked down a pair of three-pointers at the start of the second period and Brock tallied five more points to pull Shadyside within 27-23 at the 4:25 mark.

Six more from Brock kept the Tigers within four, but a couple of late hoops in the ‘paint’ from senior Austin Perkins helped the Zeps build the margin to 37-29 at the half. Brock scored 11 in the round for Shadyside while Fairchild and Perkins each had six.

With the Zeps still leading by eight, 40-32, early in the third quarter, Brock got free for three inside hoops to spark a 12-3 run that gave Shadyside its first lead of the night, 44-43, at the four-minute mark.

After a Shadyside bucket pushed the lead to three, Fairchild nailed a “triple” at the 1:20 mark and the teams ended the third quarter deadlocked at 46-46.

Fairchild and senior Grant Stottsberry scored on consecutive possessions to pull with Zeps within 59-55, at the 2:30 mark, that’s as close as Shenandoah got down the stretch.

Stottlemyer was Brock’s top scoring support with 15 points for the Tigers while Ben Wach added 10.

Fairchild was backed by Carsten Smith with 12, Perkins with eight and Stottsberry with seven.

Stottsberry led Shenandoah’s rebounders with nine while Perkins had seven. Cale Bond recorded five steals and Fairchild had three while Smith and Weston Miley both had three assists.

This was the 52nd meeting on the hardwood between the Tigers and Zeps, with Shadyside now leading the series, 27-25.

The Zeps visit Buckeye Local on Tuesday, travel to Wood County Christian on Thursday and host Barnesville on Friday. JV action tips off at 6 p.m. each night.