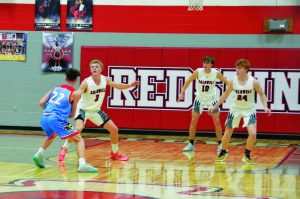 The Caldwell Redskins hosted Philo on Saturday, getting a 20-point win over the Electrics, 76-56.

“It was good to bounce back tonight,” said Caldwell Head Coach Clint Crane. “We played a big

time team last night (Garaway) – a regional finalist who returned eight guys. We have to see teams like that to get ready for what we want to do down the road. We took one on the chin last night for sure, but we got better from it.

“I thought our guys focused today with the quick turnaround,” Crane continued. “We came out

ready to play and got contributions from everyone. This is key for us. We have to get the young guys stepping up and scoring. Carter Wheeldin really stepped up scoring; Ethan Crock and Dylan Wheeler contributed with what they do;  and Chaz Pfeffer and Dylan Schott had some good minutes off the bench. Obviously, we are going to get what we get from our seniors.”

by Cooper Radcliffe. Caldwell built an eight-point lead on a bucket by Wheeldin, but back-to-back baskets by Cade Searls and a score by Wesley Wilson cut the lead to two. Crock sunk a trey at the end of the quarter to give Caldwell a 19-14 lead.

Caldwell doubled its lead in the second quarter with their seniors leading the way. Bede Lori scored 10 points and Tyce DeVolld had seven in the quarter. The Redskins led by 10, 36-26, at the half.

The Redskins took a 15-point lead late in the third period on a layup by Wheeldin, who scored 12 points in the quarter. Caldwell led 55-44 with one period left.

Caldwell extended its lead to 23 in the final quarter on a bucket by Lori and the Redskins rested the starters late..

Lori led all scorers with 31 points. DeVolld scored 19 and Wheeldin had 16.

Searls led the Electrics with 23 points followed by Wilson with 12. 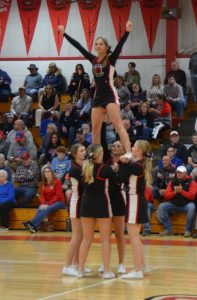 The Redskins traveled to Barnesville on Tuesday, with the Redskins coming from behind to win, 69-59.

The Shamrocks took the early lead, including 13-10 at the end of the opening quarter.

Barnesville extended its lead in the second quarter behind 10 points by Asa Geilinger, taking a 28-20 lead into halftime.

The Redskins came back in the third period, with Lori scoring seven and DeVolld netting six.

The pair combined to shoot 6-of-7 from the foul line in the quarter. Caldwell led 45-36 going into the final stanza.

Lori dominated the fourth quarter, scoring 16 including a perfect 8-of-8 from the charity stripe and the Redskins finished with a 10-point victory.

Lori led the Redskins with 32 points, followed by DeVolld with 16

The Shamrocks were led by Geilinger with 26 points.

Caldwell hosted Garaway on Friday, with the Pirates earning a 65-36 win.

The game was tied at four early in the opening quarter before Garaway went on a 14-2 run to finish the stanza with a 18-6 lead.

The Pirates extended their lead in the second quarter, outscoring the Redskins 13-10 to take a 31-16 lead at halftime.

Garaway led by as many as 25 in the third quarter and led 51-27 with one quarter remaining.

The Pirates took a 32-point lead midway through the fourth quarter and won by 29.

DeVolld led the Redskins with 10 points.

Garaway was led by Brody Roden with 16 points followed by Drew Mullet with 12.

The Redskins (8-2) host Frontier on Wednesday and Trinity Christian on Friday.