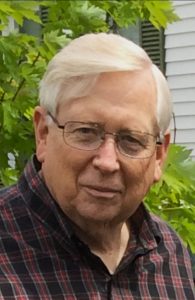 Pastor James C. Garrett age 75, of Caldwell, Ohio, passed away Wednesday, January 18, 2023 at his home. He was born July 4, 1947 in Maryville, Tennessee, a son of the late Lester Jessie and Bessie Florence England Garrett.

He graduated from Everett High School in Maryville, earned his bachelor’s degree from Johnson Bible College in Knoxville, TN, and received his teaching degree from the University of Tennessee. He cared for his community in Caldwell as a minister for over 50 years. He was a founder and Pastor of the Caldwell Church of Christ for many years. He served as Chaplain for the Hospice of Guernsey Inc. for 15 years caring for many families in some of the most difficult times. At one time he was an Insurance Agent for the Western and Southern Life Insurance Company. In his free time, he enjoyed cooking, gardening, and reading.

The family will receive friends for visitation Saturday, January 21, 2023 from 1:00 to 4:00 p.m. at the Chandler Funeral Home, 609 West Street, Caldwell, OH 43724. A funeral service will conclude visitation Saturday, January 21, 2023 at 4:00 p.m. in the Chandler Funeral Home Chapel, with Pastor Kris Bright and Pastor John Powell co-officiating. A private family burial will be held at the Olive Cemetery in Caldwell. Memorial contributions may be directed in James’ Honor to the Hospice of Guernsey Inc, PO Box 1165, Cambridge, OH 43725. Please join us in remembering James by visiting his memorial at www.ChandlerFuneralHome.net