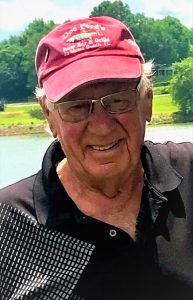 Paul R. Gill, age 84, of Caldwell, Ohio, passed away unexpectedly on Father’s Day, June 20, 2021. It was only appropriate for him to leave this world on the day designated to honor fathers. He was born January 7, 1937, in Caldwell, son of the late Charles H. and Freda Roehrig Gill. Paul graduated from Caldwell High School in 1956 and married his high school sweetheart, Jessie June Pickenpaugh Gill.  Paul worked for Caldwell Produce as the milkman while they started their family of four children.  He then went on the road with Taylor Construction, where he earned his Operating Engineer License.  He loved operating heavy equipment and built roads and sewer lines for many years. In 1970, he began a new career with Marietta Coal Company of St. Clairsville, Ohio. He was employed there for 51 years and worked his way up to the President of Operations. Paul never retired. He valued his work and the connections made over the years. He had a positive influence on everyone he met. He continued to work with John Nicolozakes at Georgetown Vineyards and will be missed by everyone.

Paul loved to work. He enjoyed his work and was a great resource to everyone who knew him. He was known as a successful small business entrepreneur who started out as a young boy delivering newspapers. He went on to establish Gill Trucking, Gill’s Drive-In, and Custom Hardwoods and Laser Engraving. He was a world traveler and wanted to visit new places. He loved driving his motor home all over the United States. He and his wife, Jessie, spent the last 30 winters at Yacht Haven in Ft. Lauderdale, Florida.  Most importantly, he wanted to share all of his adventures with his family and made many, many friends along the way. Paul loved gardening and had a green thumb. He loved cooking, fishing and watching basketball and football. He looked forward to the many high school football and basketball games to watch all of his grandchildren and great-grandchildren. Paul loved life and left a family legacy of “making every day an adventure” and “Big Ideas.” There was never anything he couldn’t do or at least try. He enjoyed life to its fullest and will be greatly missed.

Friends may call Thursday June 24, 2021, from 2-5 p.m. at McVay-Perkins Funeral Home, 416 East Street, Caldwell, where the funeral service will follow visitation at 5 p.m. Memorial contributions may be made to the First Presbyterian Church, 532 North Street, Caldwell, Ohio, 43724, or to the Caldwell Volunteer Fire Department, P.O. Box 24, Caldwell, Ohio, 43724. An online guestbook may be signed at www.mcvay-perkins.com.