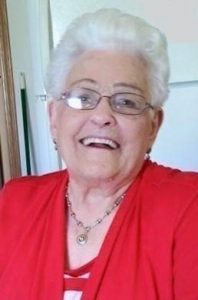 Elizabeth “Betty” Archer, age 94, of Sarahsville, Ohio, died Sunday, December 12, 2021, at her home, surrounded by her loving family. She was born June 6, 1927, at Wolf Run, daughter of the late John and Catherine Peros Urdak. Betty was a 1945 graduate of Belle Valley High School, where she was salutatorian of her class. She was self-employed, having owned and operated multiple businesses with her husband, Everett, in Noble County and in Arizona. In her later years, she was employed by K-Mart in Cambridge and managed the Willow Arms Apartments in Caldwell. She was a member of St. Stephen Catholic Church in Caldwell and Corpus Christi Catholic Church in Belle Valley, where she was active in their Catholic Women’s Clubs and sang in their choirs. She also sang solos for weddings. She was known as “the nut lady” for the famous nut rolls that she made. She loved to crochet and made over 150 afghans  and 11 American flags after September 11th, which she donated to charity. She enjoyed working crossword, word search, and jigsaw puzzles.

In addition to her parents, she is preceded in death by her husband, James Everett Archer, whom she married November 20, 1948, and who died January 29, 1998; one daughter, Linda Jean (Robert H.) Richards; one grandson, James H. “Jimmy” Archer; one great-grandson, Trey Everett; one sister, Dorothy (Bob) Schott; and seven brothers, Paul, Robert, Bill, Tom, Don, Jim, and infant Charles Urdak.

Friends may call Tuesday, December 14, 2021, from 4-8 p.m. at McVay-Perkins Funeral Home, 416 East Street, Caldwell, where a vigil service will follow visitation at 8 p.m. Funeral Liturgy with Mass will be observed Wednesday, December 15 at 10 a.m. at St. Stephen Catholic Church with Rev. Fr. Wayne Morris as celebrant. Burial will follow at Mt. Olivet Cemetery. Memorial contributions may be made to St. Jude Children’s Research Hospital at www.stjude.org. Guests are asked to take recommended safety precautions against Covid at all gatherings. An online guestbook may be signed at www.mcvay-perkins.com.