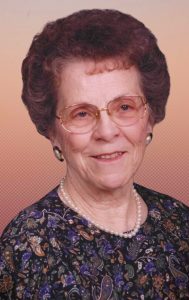 Carolyn A. Schockling, age 93, of Caldwell, Ohio, died Sunday, October 2, 2022, at her home. She was born September 4, 1929, at her grandparents’ farm outside of Caldwell, daughter of the late Joseph A. and Mildred C. Schockling Archer. Carolyn was a 1947 graduate of Caldwell High School.  She was employed over the years by West Side Grocery, Testa Brothers Coal, and Marsh Lumber Company. She was also a homemaker. She was a member of St. Stephen Catholic Church in Caldwell and its Catholic Women’s Club. She enjoyed reading, walking and crocheting. Carolyn was a beloved and devoted wife, mother, grandmother, and great-grandmother.

In addition to her parents, she is preceded in death by her husband, the late Edward C. Schockling, whom she married January 19, 1954, and who died March 25, 2008; and one granddaughter, Andrea Massaro.

A private family visitation will be observed. Funeral Liturgy with Mass will take place Wednesday, October 5, 2022, at 10 a.m. at St. Stephen Catholic Church in Caldwell with Rev. Fr. Thomas Nelson as celebrant. Burial will follow at Mt. Olivet Cemetery in Caldwell. Memorial contributions may be made to Hospice of Guernsey at www.hospiceofguernsey.com. McVay-Perkins Funeral Home, 416 East Street, Caldwell, is caring for the family. An online guestbook may be signed at www.mcvay-perkins.com