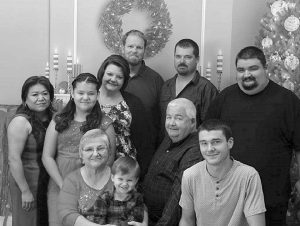 Jim was born in Cambridge, Ohio.  Jim was the son of David Scott Mackie Sr., and Marion Laverne Wood.  Jim is preceded in death by his parents David and Marion.  His siblings Scott Mackie (Donna), Terry Mackie (Tracy), and Pammy Jean.  His parents-in-law, Frank and Marlene Triplett.

Jim is survived by his loving wife Linda Mackie (Triplett), of 56 years.  His children James F. Mackie (Maria), Amanda Schierer (Erik), and Daniel Paul Mackie.  His grandchildren Troy Mackie (27), Samantha Mackie (16), and Lucas Schierer (8).  His siblings, Kay Offenberger, Daniel R. Mackie (Gail), Sherry Lippi (Stanley), and Linda Pruett.  His siblings in law Jeff Triplett (Ellen), Frances Sorg, Gerald Triplett, Frank Triplett (Judy), Brian Triplett (Tina), Brenda Estadt (Brad).  Jim also has more than 100 nieces, nephews, great nieces, great nephews, and cousins.  Though Jim and Linda only had three biological children, they have spent their entire lives parenting many children.  No door was ever locked, everyone was welcome.  Jim believed if kids were with him, they were safe, healthy, and happy.  So, you can just imagine the house full he had at all times, and still does to this day.  He was “Uncle Pops”, “Coach”, “Potbelly Pops”, “Stetson”, “Pops”, “Jimbo”, and “Dad Mackie” to all.

Jim and Linda were married on September 6, 1966.  Linda was the love his life.   He spoke recently about how he loved her, and how much respect he had for her selfless acts of love for him and their family.  He recently stated that if he could, he would live forever, just so he could take care of her the way she had taken care of him.  To his dying day, when Linda walked in the room, Jim’s face lit up and he would make some sort of comment, usually humorously inappropriate, however, on his last day, January 10, when Linda walked in, Jim went from confused to full face smile and said “I got my woman here, yeah, that’s my girl.”  The love of his life, was there, always.

Jim retired from the Pinellas County School’s in 2011.  He spent most of his life in business for himself doing one thing or another.  It usually involved cars and a good hustle.  Jim ultimately retired as a school bus driver.  When he wasn’t working, he enjoyed fishing, hunting, mowing grass, working on cars, coaching or umpiring his children’s sports teams, including the Special Olympics.  He loved to people watch, tell stories, teach you something, and offer his wisdom any chance he could.  He was heavily involved in his children’s education, from going to business events for Amanda’s FMLA Club, to playing Santa Clause for needy families that his children supported in school, to chasing after kids in broke down cars, and fetching kids in the middle of the night wherever they were.  Jim was always there for everyone, even when all the kids got older and had their own families, he remained the “go to dad” for many, and he was honored to be that for them.  Though Jim loved all of his kids, his grandchildren were his greatest joy.  He spoiled them, played with them, taught them lessons, made them laugh, and kept them loved.  Sneaking Slurpees, root beer, or McDonald’s may have happened more times than he got caught.  He never cared.  He was Grandpa doing what grandpas do.  Though Troy, Samantha, and Lucas are the only grandchildren his children gave him, his extended children gave him more, even made him a great- grandfather through love not blood.  Where there were kids, Jim was happy.  Watching them grow was pure joy for him.

Jim will always be remembered for his strength and courage.  For his open, loving heart.  For his humor, wisdom, fascinating stories, and phenomenal supervisory skills.  Most importantly he will be remembered as a husband, father, grandfather, brother, uncle and friend.

“I love you a bushel and a peck and a hug around the neck.”