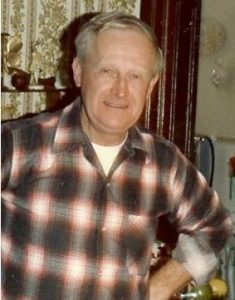 John Ward, 90, of Wooster, passed away June 7, 2020 at Fairhope Hospice in Lancaster after a battle with cancer. John was born at home in Kennonsburg on August 30, 1929 to the late Eugene and Vada Ward. He is preceded in death by his older sister Elaine Roe and an infant sister, Bonnie. His surviving siblings are Kathryn Roe of Salesville, Reva Abraham of Nelsonville, Marilyn Tilton of New Matamoras, and Frederick Ward of Cambridge.  His children, Douglas Eric Ward (Sherry) of Oxford, Debra Suzanne Ward of Austin TX, and Jeffrey Drew Ward (Kirsten Searle) of Dayton also survive him.  John had six grandchildren, Tim Ward of Oxford, Rebekah Ward of Cleveland, Andrew Ward of Cleveland, Jennifer Ward (Ryan Henak) of Seattle WA, Alex Ward of Cincinnati, and Emily Ward currently of Iwamizawa, Hokkaido, Japan.

John served in the United States Air Force after he graduated from Batesville High School in 1947.  He served in Europe initially and then in Japan during the Korean conflict, servicing aircraft. Upon completion of his duties, John attended The Ohio State University in Columbus.  Through friends, he met M. Josephine Uhl (Jo), and they married September 11, 1955.  They initially lived in Columbus, but subsequently moved to Wooster and started their family next door to Jo’s parents.  John worked in the truck parts and repair industry for several companies over the years and developed many lasting friendships.

John purchased a farm from his in-laws in the late 1960’s and raised thousands of chickens over the years.  He took great pride in his farm and would spend free time working on his tractors.  John also loved his garden and would routinely fill over an acre with his favorite vegetables.  John did not care for or want things for himself as he took great joy in giving to others.  He was immensely proud of his family and did all he could to enable them to be successful, right down to passing along his work ethic and sense of duty.  He also passed along his great sense of humor.

Graveside services & burial will be held at 11 a.m. Saturday (June 13, 2020) at St. John’s Cemetery in Noble County off of Yoker Valley Road (St John Road – County Road 34 and Lytle Road – Township Road 66) with Pastor Jeff Eschbaugh officiating. While at the cemetery, we recommend adhering to the State’s guidelines regarding the wearing of face coverings and social distancing please.

In lieu of flowers, the family asks that memorial contributions in John’s name be made to the American Cancer Society.