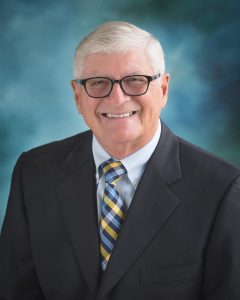 David was born February 15, 1943 in St. Marys, West Virginia to the late Willis Ogle and Fern (Cross) Ogle.  He grew up in Dexter City and attended Kent State University.

David enjoyed being a member of the Cambridge Masonic Lodge #66 F. & A.M., the Cambridge Elks and the Cambridge Country Club.  He was in several golf leagues around the area, had often taught Sunday school, and had been elected a Cambridge Township Trustee.  He loved collecting and driving cars and even drove his antique truck in the Cambridge Holiday Parade for several years. Most of all, spending time with his beloved family and friends was David’s favorite past time.

In addition to his parents, he was preceded in death by a brother, Mark Ogle.

No calling hours will be observed.  A celebration of life will be held at a later date.

In lieu of flowers, please consider a donation to the Cambridge Lions Club or the Cambridge Haven of Hope Domestic Violence Shelter.