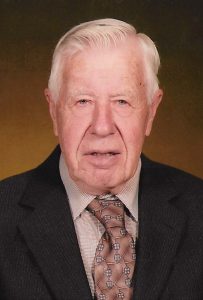 Gerald Edward Ruppel, age 92, of Caldwell, Ohio, died Sunday, January 31, 2021 at his home following a short illness. He was born September 28, 1928, son of the late Clemence George and Sophia Margaret Noll Ruppel. Gerald was a Korean War veteran, having served in the 2nd Army, 490th Engineers at Fort Campbell, Kentucky and Fort George Meade in Maryland from 1951-53. He married Jean Ann Wiley September 6, 1952, at St. Mary of the Immaculate Conception Catholic Church in Fulda. He was formerly a member of St. Mary’s and was currently a member of St. Stephen Catholic Church in Caldwell, where he served many years as a Eucharistic Minister. He was employed as a carpenter with A. G. Schoeppner until he began a family business in 1961 as a contractor for Gerald Ruppel and Sons, Inc. He built custom homes until his retirement in 2005. He was a master craftsman, building fine furniture and many pieces of church furniture. He loved gardening, hunting, and fishing. He enjoyed elk hunting in Colorado and fishing at Lake Seoul, Canada. He and his wife, Jean, attended many auctions and collected antique glassware and pottery for many years. They also enjoyed traveling and had visited 35 states, including Alaska and several trips to Canada.

Friends may call Tuesday, February 2, 2021, from 4-8 p.m. at McVay-Perkins Funeral Home, 416 East Street, Caldwell. A private funeral mass will observed by the family followed by a veteran’s service conducted by the Noble County Veteran Service Organizations. Burial will follow at Sharon Cemetery. Memorial contributions may be made to St. Stephen Catholic Church, 1036 Belford Street, Caldwell, Ohio, 43724, or to the Absolute Hospice Foundation, 39 Summit Court, Caldwell, Ohio, 43724. Guests are required to wear face coverings and practice social distancing at the funeral home as required by the state of Ohio. An online guestbook may be signed at www.mcvay-perkins.com