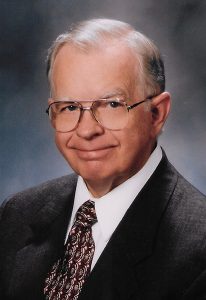 Frederick M. “Fred” Cox, M.D., age 92, of Caldwell, Ohio, died Sunday, March 14, 2021, at his home. He was born November 6, 1928, in Caldwell, son of the late Jack Ward Cox and Pansy Henrietta Archer Cox. Fred was a 1946 graduate of Caldwell High School. He enlisted in the United States Army following graduation and served during the Korean War. He then graduated in 1953 from The Ohio State University, earning a Bachelor of Science in Anatomy and he graduated in 1957 from The Ohio State University School of Medicine. He served an internship at Ohio Valley General Hospital in Wheeling, West Virginia, and chose to return to Caldwell to operate a family medical practice with his father-in-law, E. G. Ditch, M.D. Together they served the medical needs of the community from 1958-1996. He was the Noble County Health Commissioner for many years, overseeing the transition from one room at the Noble County Courthouse to what exists today. He also served as the team doctor for the Caldwell High School football team. Fred served on the Board of Directors at Farmers and Merchants Bank in Caldwell and he was a member of the Sharon Lodge #136, F&AM and the Caldwell VFW Post #4721. He was active in developing the Noble County Emergency Management Agency during and after the flood of 1998.

In addition to his parents, he is preceded in death by two brothers, Donald W. Cox and James Franklin Cox.

Friends may call Thursday, March 18, 2021, from 4-7 p.m. at McVay-Perkins Funeral Home, 416 East Street, Caldwell, and Friday, March 19 from 9-10:30 a.m. at St. Stephen Catholic Church in Caldwell. Funeral Liturgy with Mass will follow visitation Friday at 10:30 a.m. with Rev. Fr. Wayne Morris as celebrant. A veteran’s graveside service will follow at Mt. Olivet Cemetery conducted by the Noble County Veteran Service Organizations. Memorial contributions may be made to the Noble County Health Department, 44069 Marietta Road, Caldwell, Ohio, 43724. Guests are required to wear masks and practice social distancing at all gatherings as required by the state of Ohio. An online guestbook may be signed at www.mcvay-perkins.com