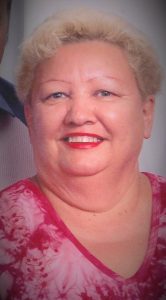 Carol Diana Minosky, age 79, of Caldwell, Ohio, died Thursday, June 3, 2021, at Astoria Place in Cambridge. She was born February 5, 1942, in Wheeling, West Virginia, daughter of the late Nick and Edna Kuhn Masciarelli. Diana  grew up on her parent’s farm near Lewisville. She was a 1960 graduate of Skyview High School, where she was a cheerleader and homecoming queen. She met the love of her life, Ronnie Minosky, at a Belle Valley basketball game and they were wed at the former St. Joseph Catholic Church in Burkhart. They began their married life in Cleveland, later moving to Zanesville and then to Caldwell to raise their children. Diana dedicated her life to being a great wife, mother, and grandmother. In addition to being a homemaker, she worked as a waitress, a factory worker, and as a sales associate at K-Mart for 25 years. She also had her own business with her husband Ronnie, selling collectible teddy bears at trade shows and flea markets for 10 years. She was meticulous in all that she did. She enjoyed listening to music. She was a huge fan of Elvis Presley and loved his music.

In addition to her parents, she is preceded in death by her husband of 57 years, Ronald G. Minosky, whom she married September 3, 1960, and who died January 18, 2018; three sisters, Julia Masciarelli, Marilyn Joan Bishop, and Mary E. Davis; and three brothers, James, Nick, and Tom Masciarelli.

Those left to cherish her memory are her children, Jeff (Darlene) Minosky of Caldwell, Susie (Jack) Ludwig of Senecaville, and Rhonda (Justin) Hastings of Overland Park, Kansas; her grandchildren, Andrea (Jamie) Gerdau of Cambridge, Eric (Emma Jane) Marshall,  Nicholas Minosky, and Andrew Minosky all of Caldwell, Kyle Ludwig of Senecaville, and Samuel Hastings, and Riley Hastings, both of Overland Park, Kansas; her great-grandchildren, Sophia, Cecelia, and Isabella Marshall and Liam Gerdau; her siblings, Esther (Jim) Ristaneo of Middletown, Judy Biedenbach of Lewisville, and Bill (Patty) Masciarelli of Summerfield; and many nieces, nephews, cousins, and friends.

Friends may call Tuesday, June 8, 2021, from 9-11 a.m. at St. Stephen Catholic Church in Caldwell, where the funeral mass will follow visitation at 11 a.m. with Rev.Fr. Wayne Morris as celebrant. Burial will follow at Mt. Olivet Cemetery. Memorial contributions may be made to St. Stephen Catholic Church, 1036 Belford Street, Caldwell, Ohio, 43724.  McVay-Perkins Funeral Home, 416 East Street, Caldwell, is caring for the family. An online guestbook may be signed at www.mcvay-perkins.com.