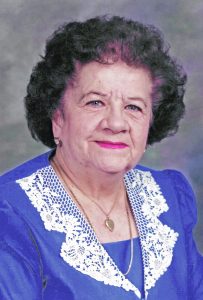 Bettie Louise Bigley Wilson, age 93, of Caldwell, Ohio, departed this life Friday, July 23, 2021, at her home. She was born April 18, 1928, near Rich Valley, Sharon Township in Noble County, daughter of the late Norris and Triphenia Parks Bigley. Bettie loved farm life, feeding the animals and raising chickens. She attended Danford Grade School for six years. When the school closed, she went on to attend Sharon Grade School and then Forest Grove High School. In high school, Bettie sang in the choir and played an E flat alto horn in the orchestra. She loved music and considered being a music teacher. She was also in 4-H. World War II was taking place, so many things were different. On January 21, 1948, she married Charles Junior Wilson, who was a World War II veteran. They started out farming, but later moved to Terrace Addition in Caldwell. After much prayer and trials, their son Daniel Charles was born, who was a great joy to them both. Bettie worked as a sales clerk for the K-V Store and Gateway Market in Caldwell, K-Mart in Cambridge, and Hayes True Value in Caldwell, retiring after 42 years. She was also a janitor for her church for 16 years. She was baptized into Christ in her teens and became a member of Olive Green Church of Christ. Later she became a member of First Church of Christ in Caldwell, where for many years she sang in the choir, helped with Vacation Bible School, and taught Christian Youth Hour. She hoped she would be remembered as a dedicated Christian and one who loved to help others. Bettie was a member of the Sharon Grange for over 75 years, and a member of Noble County Pomona, state and national granges, Noble County Performing Arts, Noble County Historical Society, Noble County Genealogy Society, Noble County Ripples, The Young at Heart Club, and PERI. In April, 1984, she helped organize the Good Neighbor Quilting Club, of which she was a member.

She was preceded in death by her husband, Junior, who went to be with Jesus April 23,  1992; two sisters, Thelma Bigley Brush and Marie Bigley Boyd; two brothers, Bertram and Wiley D. Bigley; and five nephews, Norris and Noble Farson, Robert Bigley, and Brad Marquis and Ren Boyd, who both passed away recently.

Friends may call Sunday, July 25, 2021, from 2-5 p.m. at McVay-Perkins Funeral Home, 416 East Street, Caldwell. The funeral service will be observed Monday, July 26 at 11 a.m. at the First Church of Christ, 601 North Street, Caldwell with Pastor Brent DeWees officiating. Burial will follow at Sharon Cemetery. Memorial contributions may be made to First Church of Christ or to the Sharon Cemetery Association, c/o Judy Baker, 15023 Marietta Road, Caldwell, Ohio, 43724. An online guestbook may be signed at www.mcvay-perkins.com