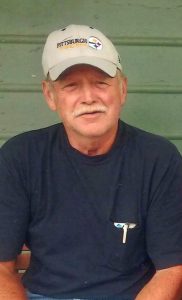 Richard Allen “Dick” Wyscarver, 68, went to his Heavenly Home and entered eternal rest on September 16, 2021 at his home, surrounded by his loving family following a three year battle with cancer.

He was born on October 30, 1952 in Barnesville, son of the late Robert and Grace (Long) Wyscarver.

Richard was a 1970 graduate of Shenandoah High School, where he played football and baseball.  He was drafted into the United States Army in 1972 and was stationed in Germany until 1974.  He was a past member of American Legion Post 578 of Batesville.

He worked as a coal miner in North American Number One Mine for nine years.  He retired from Centria in Cambridge following thirty-one years of service.  Richard will forever be remembered for his hard work ethic and dedication to his family.

He was an avid sports fan.  He was a die-hard fan of the Pittsburgh Steelers and the Pittsburgh Pirates.  He enjoyed watching Outlaw dirt racing around the area.  One of his favorite activities was supporting his children and grandchildren at their athletic and extracurricular activities.

He was Methodist by faith.

In addition to his parents, he was preceded in death by a brother-in-law, David Larry Wehr; and a sister-in-law, Connie Wyscarver.

He was loved and will be missed by his family: his wife of forty-eight years, Sheryl (Garrett) Wyscarver of the home, whom he married September 23, 1972; two daughters, Abby (Dean) Fusco of Thornville and Lindsay (Keith) Roe of Zanesville; and four grandchildren, Wyatt Roe, Nicholas Fusco, Leslie Roe, and Michael Fusco.  He is also survived by three siblings, Ronald Wyscarver of Barnesville, Gerry (Dorothy) Wyscarver of Westerville, and Joyce Wehr of Jerusalem; two aunts, Melba Carpenter and Lucille Christman; and several nieces & nephews.

Visitation will be held Monday (September 20, 2021) from 2 p.m. to 4 p.m. and 6 p.m. to 8 p.m. at Thorn-Black Funeral Home, Quaker City, where funeral services will be held Tuesday (September 21, 2021) at 11 a.m. with Pastor Mark Slay officiating.  Friends and family are welcome, but due to COVID-19 please take all necessary precautions to ensure your own safety and everyone else’s should you decide to attend.  The Wyscarver family strongly encourages all who attend to please wear a mask.

Personal condolences may be sent to the family by visiting www.thorn-blackfuneralhomes.com.