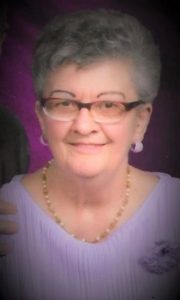 Carol S. Schell, age 78, of Caldwell, Ohio, died Friday, January 14, 2022, at Altercare Summit Acres in Caldwell. She was born February 25, 1943, in Dixon Ridge, Washington County, Ohio, daughter of the late Wesley David Johnson and the late H. Lucille Dennis Johnson Braden. Carol was a 1960 graduate of Southern Noble High School, which was in Dexter City. She sold Friendly Home Products for 12 years and Stanley Home Products for over 30 years. She was a member of St. Mary of the Immaculate Conception Catholic Church in Fulda and its Catholic Women’s Club. She was a religious education teacher for over 30 years and led a Bible Study for several years. Along with her husband, Fred, they led RCIA at St. Mary’s for many years and she went on a renewal three times. Carol was an avid Caldwell Redskins fan. She loved playing bingo, working crossword puzzles, playing cards, singing, and she was an excellent poetry writer. Carol was a woman of great faith. She was an incredible example to her family and she was the glue who held her family together.

In addition to her parents, she is preceded in death by one daughter, Lora Schell; one granddaughter, Marissa Robertson; one sister, Margie Ruppel; two brothers-in-law, Denver Schell and Melvin Schell; and three sisters-in-law, Phyllis Schell, Leona Schell, and Rose Schell.

Friends may call Wednesday, January 19, 2021, from 4-7 p.m. at McVay-Perkins Funeral Home, 416 East Street, Caldwell. A Christian Scripture Service will follow visitation at 7 p.m. Funeral Liturgy with Mass will be observed Thursday, January 20 at 10:30 a.m. at St. Mary of the Immaculate Conception Catholic Church with Rev. Fr. Chester Pabin as celebrant. Burial will follow at St. Mary’s Parish Cemetery. Guests are asked to follow recommended safety guidelines against Covid at all gatherings. An online guestbook may be signed at www.mcvay-perkins.com