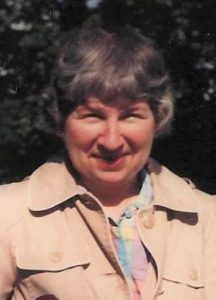 Naomi K. Fleming, age 88, of Caldwell, Ohio, died Thursday, February 17, 2022, at SE Ohio Regional Medical Center in Cambridge. She was born August 19, 1933, in Terre Haute, Indiana, daughter of the late Paul Chell and Ruth Magdalena Burns Recher. Naomi was a graduate of New Castle High School in New Castle, Indiana, and graduated with a bachelor’s degree in Religious Education from Wittenburg University. She was a teacher at New Philadelphia City Schools. Along with her husband Dave, she owned and operated Fleming Insurance, Bookkeeping, and Tax Service in Caldwell. She was a member of the First Presbyterian Church in Caldwell, where she played the organ for over 40 years, and served as an elder and deacon. Naomi enjoyed working jigsaw and crossword puzzles, playing games, and she loved music.

In addition to her parents, she is preceded in death by her husband, William David “Dave” Fleming, whom she married June 15, 1968, and who died June 25, 2018; one sister, Carolyn Scheile; and three brothers, Dick Recher, Kenneth Recher, and infant brother Howard Recher.

A private graveside service will be observed by the family at Olive Cemetery in Caldwell. A Celebration of Life service for Naomi will be held at a later time. McVay-Perkins Funeral Home, 416 East Street, Caldwell, is caring for the family. An online guestbook may be signed at www.mcvay-perkins.com