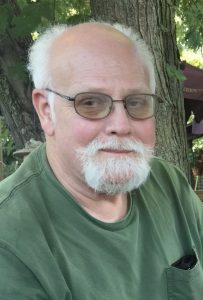 Dale Hoium died March 22, 2022 after a sudden heart attack at Marietta Memorial Hospital. Dale had been a Type 1 diabetic throughout most of his life. He lived life to the fullest despite this.

At five years old he developed a love for internal combustion engines when his father built a go cart for him. He turned this interest into both a career and life long hobby. He graduated from the Milwaukee School of Engineering with an Associate’s Degree in Internal Combustion Engineering Technology and a Bachelor’s Degree in Mechanical Engineering Technology. He later earned an MBA at Oklahoma City University. His first job was at Outboard Marine, Waukegan, Illinois. He then worked for Dresser Industries at Waukesha Engine Division, Waukesha, WI and Westech Operation in Shawnee, Oklahoma. He spent most of his career at Mahle in Caldwell, Ohio. He retired from Simonton Windows in Pennsboro, West Virginia. Dale traveled internationally for his work. He made repeated trips to Mexico and China where he learned the cultures.

In 2010 Dale and his son-in-law, Tony Styer embarked on an adventure. They negotiated a sale of The Marietta Brewing Company. Dale helped repair equipment to get the restaurant running. Tony and his wife, Dana took over ownership and operation of the brewery. Dale’s last project was to refinish the oak tables to the luster they have today.

Dale spent his weekends working on any kind of engine that needed repair. His father once told his wife not to buy a new car, because Dale would take it apart before she had a chance to drive it. He left a legacy of vintage outboard motors in various states of repair. After Dale retired, his son bought an antique tractor and left it for his dad to tune up one winter. By the time spring arrived the entire tractor had been taken apart and restored with a shiny red coat of paint. Dale could fix almost anything. If his children and grandchildren broke a toy they knew who would make it good as new. After Dale had been for a visit to one of his relatives’ homes, they would find that he had made numerous repairs. Dale seems to have left his car on a set of ramps on the driveway. No one has dared to drive the car to find out why.

Dale volunteered as the treasurer of Young Engineers and Scientists and brought a race car each year to this event for Middle School students. Dale also discovered that help was needed to keep outboard motors running at Marietta Crew meets. He volunteered in this position even after his daughter graduated. He also spent many Sunday afternoons at Camp Hervida with 4H Shooting Sports long after his son had outgrown it

Dale met his wife, Ellen while working at a Girl Scout camp in West Bend, Wisconsin. They had just completed 45 years of marriage. She will miss him every day and lunch will never be the same. He will be sadly missed by his four children, Lara Hoium (Eric Siddall) of Savannah, Georgia, Dana Styer (Tony Styer) of Marietta, Ohio, Peter Hoium (Katlin Harriman) of Marietta, Ohio, and Clara Hoium of Bozeman, Montana. His words of advice will stay with them forever. His grandchildren, Estella and Cooper Styer will always remember their Papa with fondness. He also leaves behind his sister, Jean Sandrock (Paul Sandrock) of Madison, Wisconsin.

Memorial services will be held 11:00a.m. Saturday, April 2, 2022 at the Marietta Chapel of Cawley & Peoples Funeral Home with Patricia Peoples officiating. The family will greet friends one hour prior to the service. There will be a reception at the Marietta Brewing Company following the service.

Cawley & Peoples Funeral Home is honored to serve Dale’s Family and offers on line condolences and many resources by visiting www.cawleyandpeoles.com or on their Facebook page.