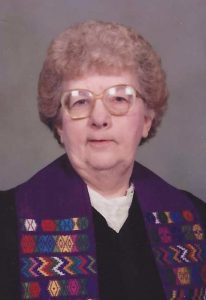 In addition to her parents she is preceded in death by her husband, Charles W. Lewis, whom she married in 1940 and who died in 1971; one son, David Robert Lewis, who died in 2002; four brothers, Robert, Russell, Francis, and Dean Pennock; her father and mother-in-law, Howard and Gladys Lewis; and her sisters-in-law, Eleanor Pennock, Norma Leget, and Faye Combs.