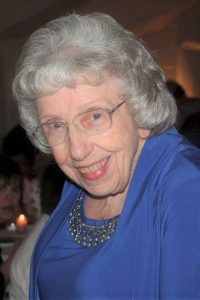 Bertha A. Schroeder, age 90, of Caldwell, Ohio, died Friday, April 22, 2022, at her home. She was born December 16, 1931, in Gem, daughter of the late John V. and Veronica M. Fogle Saling. Bertha was a 1949 graduate of Southern Noble High School. During high school, she was employed by the original Ogle’s Restaurant. She was also employed as a telephone switchboard operator in Caldwell. She was homemaker, who along with her husband, owned and operated a family farm for many years. She was an avid gardener who especially enjoyed tending to her flowers and roses.

Bertha was a member of St. Stephen Catholic Church in Caldwell and Noble County Right to Life. Her career was her devotion to God and family. This vocation of service and ministry to her family was one she took very seriously and was very passionate about. She had an unmatched gift for making each person in her presence feel uniquely loved and important. In addition to her family, she loved poetry and nature. She modelled a combination of humility, witty humor, and elegance in the best way. She was a teacher who spoke with her actions instead of words and was an inspiration to many. She was willing to forgive and left a memorable mark on the lives she touched. It is with prayers and our combined memories that we will recall the joy of God’s promises that she so faithfully taught us about. Our family requests prayers for the healing of hearts as there are no words to describe the loss of her.

In addition to her parents, she is preceded in death by her husband, Elroy A. Schroeder, whom she married April 30, 1960, and who died February 19, 2009; one step-son, Philip James Schroeder; one grandson, Timothy James Schroeder; one sister, Norma Jean McElroy; and seven brothers, Albert John, Edward John, Leo Felix, Francis David, Harry Albert, James Joseph, and Charles Raymond Saling.

Friends may call Monday, April 25, 2022, from 2-8 p.m. at McVay-Perkins Funeral Home, 416 East Street, Caldwell, where a rosary service will follow visitation at 8 p.m.. Funeral Liturgy with Mass will be observed Tuesday, April 26 at 10:30 a.m. at St. Stephen Catholic Church in Caldwell with Rev. Fr. Wayne Morris as celebrant. Burial will follow at Mt. Olivet Cemetery. An online guestbook may be signed at www.mcvay-perkins.com