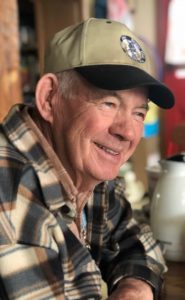 Fred Duane Wickham Sr., 80, of Chandlersville, Ohio, passed away Sunday, Nov. 27, 2022 in the care of The Oaks on Northpointe nursing home in Zanesville, Ohio. Born on October 29, 1942 to the late Ivan and Beulah (Martin) Wickham. After Beulah’s death in 1944, he was raised by Ivan and second wife Pauline (Schoeppner) Wickham.

In 2020 he married Theresa (Stillion) Wickham. Together they shared the love and comfort of his last few years together. Sharing family time with her children Jim (Kelly) Stillion, Craig (Karen) Stillion and Lisa (Shane) Dearinger and many grandchildren and great-grandchildren.

Fred was a lifelong member of The Ark Spring Baptist Church of which he served as Deacon for 40 years. He served many years on the Cumberland Volunteer Fire Department. He enjoyed antique tractors belonging to The Old Steam and Gas Club, Freeland Valley Antique Tractor Club and The Old Iron Power Club. He was a member of the Southeastern Ohio Civil War Round Table. He enjoyed many years farming with Roger Mitchell as well as a few years driving safari bus at The Wilds shortly after it opened. But his life’s work was operating heavy equipment for Monroe Grading, Great Lakes Operating Engineers and 22 years for Sidwell Brothers, Central Ohio Coal from which he retired.

In his retirement years you could always find him with his coffee buddies at Gracie’s Grocery in Cumberland, a gas station garage in Barnesville and McDonalds on 40 West in Zanesville. He loved sharing stories and being with friends. He had an ornery grin that was infectious and endearing.

He is preceded in death by his parents, his wives; Karen Wickham and Martha Giffen, his dear sister and brother-in-law Alice Jean (Lynn) Hall, three nieces and two nephews. He is survived by his wife Theresa, his children, grandchildren and great-grandchildren, his brothers Carl (Sandy) Wickham of Cumberland and Stanley (Becky) Wickham of Lancaster, Ohio. Many cousins, nieces, and nephews and many dear friends.

In lieu of flowers the family would ask for donations in honor of Fred be sent to The Ark Spring Baptist Church at 54248 Howell Road in Cumberland, Ohio 43732.

Visitations will be held from 12 to 4 p.m. on Thursday, December 1, 2022 at the Ark Spring Baptist Church, 8085 Big Muskie Drive, Chandlersville, Ohio.  Funeral services will be held at 4 p.m. with Pastor Noah Barr officiating.