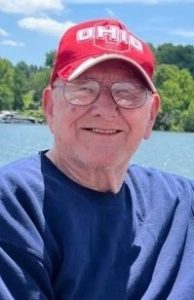 Richard A. Pangle, age 82, of Sherrodsville, Ohio, formerly of Noble County, died Tuesday, November 29, 2022, at The Truman House Community Hospice in New Philadelphia. He was born December 22, 1939, in Cambridge, son of the late Earl and Stella Angelo Pangle. Richard was a 1957 graduate of Caldwell High School. In his younger years, he worked in road construction and he retired from the Mahle Corporation plant in Caldwell where he was a borer line head technician. He was a member of the United Steelworkers Local #4836 and served as a Boy Scout troop leader. Richard was a faithful member of the First Church of Christ in Caldwell, where he served as an elder, deacon, Sunday School teacher, and Vacation Bible School volunteer. He also was instrumental in leading sing-a-longs at Summit Acres Nursing Home. He was devoted to his children, grandchildren, and great-grandchildren.

In addition to his parents, he is preceded in death by his wife, Marilyn Jean Williams Whetstone Pangle, whom he married July 31, 2010, and who died September 13, 2021; one daughter, Tamela A. Varhola; one son, Richard V. Pangle; three sisters, Janice Williams, Carol Roberts, and Shirley Fogle; one brother, Earl “Bill” Pangle; and six grandchildren.

Friends may call Saturday, December 3, 2022, from 2-8 p.m. at McVay-Perkins Funeral Home, 416 East Street, Caldwell. The funeral service will be observed Sunday, December 4 at 2 p.m. at First Church of Christ, 601 North Street, Caldwell, with Pastor Brent DeWees officiating. Burial will follow at Olive Cemetery. Memorial contributions may be made to The Truman House Community Hospice at www.myhospice.org. An online guestbook may be signed at www.mcvay-perkins.com