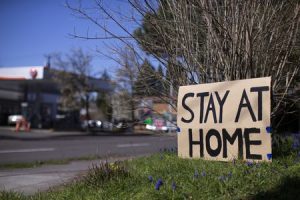 by Paul Koval
On Sunday, Ohio Governor Mike DeWine announced a new executive order to add to the rapidly growing list of prohibitions in the state. The “Stay at Home” order, issued by Ohio Department of Health Director Amy Acton, will go into effect beginning Monday, March 23 at 11:59 p.m. The order aims to prevent the spread of the coronavirus by requiring residents to stay at home unless engaged in “essential work or activity.”
At a press conference, Governor DeWine said “There is nothing in the order that we haven’t already been talking about. There is nothing in this that I haven’t’ been asking you to do for the last few weeks.” He asks residents to “be mindful when you go out.”
The order requires that ‘nonessential’ businesses cease operations to prevent the spread of the coronavirus. This list includes public amusement places, playgrounds, funplexes, theme parks, bowling alleys, movie theaters, concert halls, and social clubs, among others. The order also calls for people to practice “social distancing,” maintaining space of at least six feet from one another.
Among essential services listed in the order are grocery stores, pharmacies, food and beverage producers, agricultural producers, charitable and social services, religious facilities, media, gas stations and businesses need for transportation, hardware providers, shipping facilities, laundry services, restaurants, educational and financial institutions, among others. The order calls for “basic operations” of businesses. Last week, Ohio successfully postponed the state’s primary elections. On Tuesday, it was announced that elective surgeries were postponed. On Wednesday, the state ordered salons, barbers shops, tattoo parlors, and massage therapy businesses to close.
Governor DeWine said that Ohio’s daycare centers may operate with a temporary pandemic child care license that can be acquired through the Ohio Department of Jobs and Family Services.
The new order requires people gathering in groups of ten or less. Initially, the group size was limited to 100, and then reduced to 50. At the same time, DeWine said that “People need to get out.” He advocated going out and going to state parks but to practice social distancing.
When asked what penalties that nonexempt businesses would face of they continued to operate, Governor DeWine said ‘this was not designed to be punitive, but this is a health order. It’s not a health suggestion. He went on to say “we would expect people simply to comply with it.”
When asked about restaurants operating, DeWine stated that “carryout is still okay.”
The Ohio National Guard will be deploying approximately 300 guardsmen to various counties in Ohio to assist food pantries with distribution to residents. According to a press release on Thursday, members of the Ohio Military Reserve will also be placed on state active duty to coordinate with the Ohio Association of Foodbanks at the food bank locations. Many users across the country on social media have posted videos and pictures of military vehicles being moved around. Some were old footage and that did not indicate any type of martial law. Others were in larger cities, such as Baltimore, of state National Guard set up to assist with covid 19 testing. Chad Wolf, acting Secretary of the Department of Homeland Security dispelled national lockdown rumors on his official Twitter account.
Health Director Amy Acton, who issued the order, said “Snuggling up with Netflix. Binge watching your way through this” is a way to limit exposure. She also stressed that widespread testing is at least a month away.
There were 351 cases confirmed in Ohio as of Sunday with one being in Washington. None have been reported in Noble County. There have been three deaths in the state. During press conference, the official state website for coronavirus was overloaded with traffic but was available afterwards. Resident can find it by logging onto https://odh.ohio.gov/wps/portal/gov/odh/know-our-programs/Novel-Coronavirus.
Posted in Breaking News