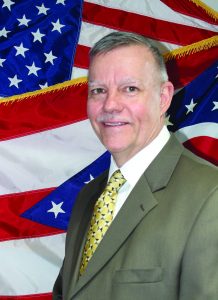 James J. Forshey has been named the new warden at Noble Correctional Institution (NCI).  He assumed the duties as warden on March 30.

Warden Forshey was most recently the Southeastern Region Reentry Administrator for the Ohio Department of Rehabilitation and Correction. He began his career with DRC in 1995 as a Storekeeper Supervisor at Belmont Correctional Institution, and worked his way up through the ranks at BeCI and served as deputy warden for six years. Forshey is no stranger to the area; he was raised in Noble County and graduated from Shenandoah High School.  He previously served as the warden at the Ohio State Penitentiary (2013-2015) and served as deputy warden at NCI back in 2012.  He resides in Belmont County with his wife Cheryl.

When asked about coming to NCI, Forshey said, “I have worked with numerous staff at Noble in the past, so I knew I was being assigned to a very good institution. I look forward to working very closely with staff at all levels in a ‘team effort’ to improve upon an already solid organization.  While these are unprecedented times with the COVID-19 issues, I look forward to continuing and fostering new community partnerships that will benefit the community as well as the institution.  I am excited about the new challenges of being the warden at NCI.”

Warden Forshey received an Associates in Criminology from Belmont Technical College.  He obtained a Bachelor of Arts in Organization Leadership and Development from Wheeling Jesuit University in West Virginia.