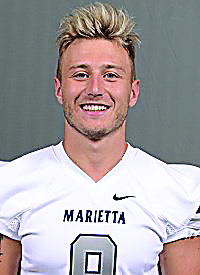 The Clyde Lamb Awards are presented annually to the top male and female scholar athletes at each of the 10 OAC institutions. Criteria for the award includes at least two years participation in an OAC-sponsored sport, senior status, a minimum grade point average of 3.00 and sportsmanlike conduct in a manner that has brought credit to the student-athlete and his or her institution.

Clark was a four-year letter winner on the football team and served as the Pioneers’ starting running back his final two seasons. His numerous accolades include being named third team All-American by D3football.com in 2018. Clark also earned All-North Region honors his junior year and was twice named All-OAC.

The OAC’s leading rusher in 2018, Clark finished his career in the Navy Blue and White with 2,874 rushing yards, 4,708 all-purpose yards and 39 career touchdowns. He holds the school record for touchdowns in a game with six and for kick return yards in a game with 201.

Off the field, Clark was a Marietta College Student Ambassador and Pioneer Pipeline Leader. He volunteered with the Special Olympics and completed an internship at the Washington County Courthouse.

The award was founded in 1985 and is named in honor of Clyde A. Lamb. Lamb organized the department of health and physical education at Ohio Northern University in 1929, and served as a coach, department chairman and athletics director at ONU from 1929-64. He continued to teach full-time until his death in 1969.