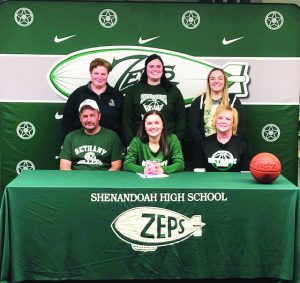 She’s moving on to the next level, but “Wheels” will still be wearing green!

Shenandoah High senior Ashleigh Wheeler, who scored 1,119 points during her high school career, will take her diverse talents to Bethany College where she will be a member of the Bison women’s basketball program next winter.

The 5-3 point guard, who transferred to Shenandoah from Buckeye Trail before her junior year, capped her final prep season by earning first team and Co-Player of the Year in both the Eastern District and District 12 in Division IV; and was selected to play in the District 12 All-Star Game in early April. She’ll also add all-Ohio and all-OVAC honors to her list of accolades when those teams are announced.

As a senior, Wheeler averaged 12 points per game along with six assists, five rebounds and five steals and she was a 75 percent free throw shooter. A four-year letterwinner (two at Trail, two at Shenandoah), she finished her career with 1,119 points.

As a junior, she averaged 17.8 points, five steals, four rebounds and four assists and she set school game and season records for steals. She was special mention all-Ohio and first team all-Eastern District, all-District 12 and all-OVAC.

Transferring to Shenandoah was a difficult move, but one Wheeler doesn’t regret thanks to coaches Sami and Jodi Schott and last year’s seniors, especially Raegan Flood.

“It was a tough decision, but ultimately I had to do what was best for me,” she said. “When I came here, Sami and Jodi were very welcoming and ‘Reggie’ (Flood) was the one who showed me around and made me feel comfortable here.

“I have lots of memories, both from basketball and everyday at school,” Wheeler added. “It’s  hard to pick out any one or two things above the others, but the bus rides were fun and hiding from Sami was great.”

“Coach (Brian) Sansom introduced me to seven or eight of the girls and they were very welcoming and they made me laugh, so that was a good thing,” said Wheeler, who pointed out the “I just felt very comfortable there.”

“Wheels” knows she’ll have to up her game to play college ball.

“The competition goes from being a big fish in a small pond to a small fish in a big pond,” she said, “so I just need to work on every aspect of my game and keep improving.”

Bethany, by the way, just wrapped up its COVID-shortened season with a x-x record with a young team which started a couple of freshmen.

Perhaps the happiest person around when Wheeler joined the Lady Zeps was head coach Sami Schott.

“It was a huge move for her to come here and any coach would be excited to get a player that brings what she does to the court,” said Schott. “Last year, we had already started practice when she came in but between her junior and senior year, her leadership with a young team was tremendous.

“She said to me in the off-season: ‘What do I need to do to leave this team better than where we’re at now and leave my mark on this program?’” the Lady Zeps’ coach recalled.

“She’s a very team-oriented person,” Schott continued. “The way she handles herself on the court and her comfort level with her teammates. She’s helped a lot of our freshmen learn how they need to play.

“People know she can score,” she added, “but it’s how she sees her teammates and her overall game makes her an even bigger threat.”

Schott says Bethany was the perfect choice for Wheeler.

“Their style they play is similar to how we operated here,” she stated. “They’re undersized in some positions, but they’re quick and she’ll have no problem fitting into their style. Coach Sansom loves the way she sees the floor and plays a lot bigger than she is.”

Wheeler’s choice to attend Bethany brought an extra smile to Coach Schott, who played her college basketball for the Bison.

“I had four great years at Bethany and made some great memories on and off the court,” she related. “It’s great knowing she’ll be taken care of because it’s a very tight-knit community up there, and she’s not that far away so hopefully we can catch a few games.

“It’s always exciting to have someone go on to the next level,” she added, “but to have them go to your alma mater makes it extra special, for sure.”

The daughter of Kim and Jeff Wheeler, she plans to major in psychology/pre-occupational therapy and minor in business at Bethany. She ranks 10th in her class with a 3.7 GPA.