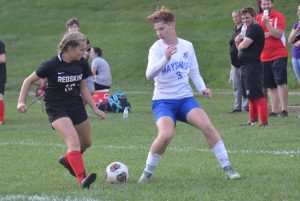 The Caldwell High soccer team hosted Rosecrans on Tuesday, with the Bishops posting a 4-0 shutout victory.

“There is nothing to hang our heads on this one,” said Coach Michael Ontko. “Since we played them already this year, we were familiar with them. We tried to man mark the goal scorers from the last game, and we had a great first half with going into halftime only down 1-0. 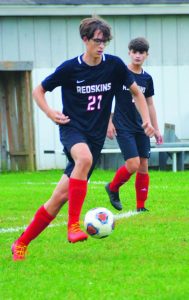 “Carter Wheeldin and Chaz Pfeffer played great again today,” he continued. “They are really starting to show they can work well together. Defensively, we did well, led again by good performances by Gabe Parrish and Skylour Feldner. There were times we just lost focus and watched the play and lost our marks and they made us pay. I’m proud of the team. We went against a very good team with mostly freshmen and sophomores and made it very competitive until the final 15 minutes when they put in their fourth goal.”

Logan Brown was the only multiple goal scorer for the Bishops with two.

On Thursday, the Maysville Panthers visited Caldwell, with the Panthers earning a 4-0 victory.

“We didn’t get the result we wanted for our seniors.,” said Ontko. “It was heartbreaking for the seniors. Maysville passed really well and controlled the game. All of them were fast, and we were intimidated because of their size. We will just have to regroup and get ready for the next game.”

Mac Clark had seven saves in the goal for the Redskins.

Up next for the 2-9-2 Redskins are Indian Creek on Wednesday at home and Union Local on Thursday on the road.